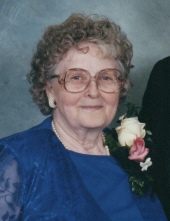 Mavis Gladys Sembrick Barrow was born on October 26, 1926 in rural Erskine, Minnesota to parents Oscar and Caroline Rost Sembrick. She was baptized and confirmed at Lima Lutheran Church and attended rural school near her home. After her schooling, Mavis was employed at St. Francis Hospital in Crookston, Minnesota. She was married to Clifford Hanson and together they had four children, Bonnie, Paulette, Linda and Nanci. Mavis began work at Bagne's Meat Market in Erskine where Don was employed at the time. In 1960, they purchased the market and changed the name to Don's Meat Market. It was a good partnership...Don was the butcher and Mavis was the wrapper and jack of all trades.They were married on December 31, 1966 and to this union a son, Dale, was born. Also added to the family with this union was Don's son, Barry. In 1990, they sold the shop building. At that time, they began construction on a new meat processing building north of Highway 2 in Erskine. They owned and operated that business from 1991 until their retirement in 2000. Mavis and Don partnered together in the meat business for over 40 years and in marriage for over 51 years. Mavis enjoyed crocheting, gardening (especially flowers), canning, crossword puzzles, watching the Minnesota Twins and Vikings and spending time at the lake and playing cards in the evening with family and friends.Mavis passed away on Saturday, August 4, 2018 at Essentia Health Hospital in Fosston at the age of 91 years.Survivors include her husband, Don, of Erskine; children, Bonnie (Lenny) GeBauer of Schofield, WI, Linda Molstad of Schofield, WI, Nanci (Patrick) Seidel of Crookston, MN, and Dale (Laurene) Barrow of Grand Forks, ND; son-in-law, Pete LaCoursiere of Erskine. Grandchildren, step grandchildren, great grandchildren, and other relatives also survive.She was preceded in death by her parents; daughter, Paulette LaCoursiere; son, Barry Barrow; grandchildren, Chad Molstad and Tawnya Plante; an infant grandchild; three brothers, Fred Sembrick, Kenny Sembrick, Maynard Sembrick; and one sister, Shirley Sembrick Nelson. Funeral services will be held at 10:00 a.m. on Friday, August 10th, at Grace Lutheran Church in Erskine with the Rev. Timothy Lundeen officiating. Interment will be in Lima Cemetery, rural Erskine. Visitation will be held for one hour prior to the service on Friday at the church. Arrangements are with the Carlin Funeral Home of Erskine and messages of condolence may be sent at www.carlinfuneral.com. Memorials may be made to Lima Cemetery or Fairview Cemetery funds.

To order memorial trees or send flowers to the family in memory of Mavis Barrow, please visit our flower store.