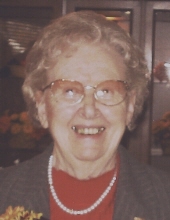 Meredith Bursheim, age 98, of McIntosh, MN, passed away on Saturday, February 18th, at McIntosh Senior Living. Funeral services will be held at 2:00 p.m. on Sunday, February 26th, at Dovre Free Lutheran Church in Winger with the Rev. Raynard Huglen officiating. Interment will be in Dovre Free Lutheran Cemetery, rural Winger. Visitation will be held for one hour prior to the service on Sunday at the church. Arrangements are with the Carlin Funeral Home of Fosston and messages of condolence may be sent at www.carlinfuneral.com.Meredith Isabelle Raaen was born on October 28, 1918 at Winger, Minnesota to parents Oscar and Ragna (Snustad) Raaen. She was raised in rural Winger, attended Wide-A-Wake Country School and graduated from Oak Grove Lutheran High School, Fargo in 1937.Meredith married Robert "Bob" Bursheim on June 16, 1940 in Winger. Meredith and Bob made their home in Winger, with the exception from 1964 to 1970 when they moved to Minneapolis to be involved with the headquarters facilities for the newly formed Association of Free Lutheran Congregations (AFLC). Following Bob's death in 1995, Meredith resided in McIntosh until the fall of 2010 when she moved to Country Place in Erskine. Due to health reasons, she moved to McIntosh Senior Living in 2013.Meredith was a lifelong member of Dovre Lutheran Church in Winger where she was active in many church activities. She was the organist of the church for over 70 years.Meredith's passion was music. She enjoyed playing her piano and helped many area young people learn the skill with her piano lessons. Meredith and her son Neil provided many hours of musical pleasure with her piano and Neil's violin. On Saturday, February 18, 2017, Meredith passed away at McIntosh Senior Living at the age of 98.Survivors include her two sons Neil (Carol) Bursheim of McIntosh, and Dean (Chyrl) Bursheim of Erskine; brother William (Bill) Raaen of Fergus Falls; 4 grandchildren; 6 great grandchildren; and 4 great great grandchildren; and nieces, nephews and cousins.She was preceded in death by her parents; husband; and sister Avis Raaen Johnson.

To order memorial trees or send flowers to the family in memory of Meredith Bursheim, please visit our flower store.