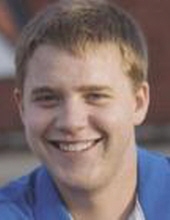 Michael Mandt, age 24 from Maple Grove, MN died on Wednesday, November 2nd at his home in Maple Grove. Funeral services will be held on Monday, November 7th at 2:00 PM at Our Saviors Lutheran Church in McIntosh with Rev. Gordon Syverson and Father Chuck Huck officiating. Visitation will be on Sunday, November 6th from 5:00 to 7:00 PM with a prayer service at 7:00 PM at Our Saviors Lutheran Church in McIntosh, and there will also be visitation for one hour before the funeral at the church on Monday afternoon. Interment will be in Our Saviors Lutheran Cemetery in McIntosh. The Carlin-Hoialmen Funeral Home serving McIntosh is in charge of the arrangements. Messages of condolence may be sent to carlinhoialmen.com. Michael (Mike; Mikey) John Mandt was born July 6, 1992 in Fargo, ND the son of Kerry and Kelly (Cigelske) Mandt. He moved with his family from Moorhead, MN to Maple Grove, MN in 1997. Mikey graduated from Osseo High School in 2011; and if asked, he would have given his mischievous grin and said, yep, I graduated top of my class. Mikey was a people person; at any given time the more friends and family he had around him, the better. He had a silly grin that flashed anytime he knew he was going to be in trouble, and kept everyone on their toes. There was never a dull moment. Mikey loved children, and was a favorite of all the little ones who came to his moms home daycare. He was an outdoorsman who loved to hunt and fish, and he loved being at his grandparents farm in McIntosh, MN. He enjoyed playing X-Box, and he loved cars. To laugh and to make others laugh made him happy; he had an extraordinary spirit. On Wednesday, November 2, 2016 Michael John Mandt, much beloved son, brother, grandson, nephew, cousin and friend, died at home in Maple Grove at the age of 24 years.He is survived by his parents; his brother Nicholas and sister Brekken; maternal grandparents Curt and Evelyn Cigelske, Lake Park, MN; paternal grandmother Ruth Mandt, McIntosh; uncles and aunts Kevin (Susan) Cigelske, Audubon, MN, and Kyle (Kim) Mandt and Kevin (Anna) Mandt all of McIntosh; and cousins Alex, Sarah, Kimmy, Josh, Kylee, Kaysee, Colten and Shelby. He was preceded in death by his grandfather Albert Mandt; and close family friend Valerie Huck. Blessed be his memory

To order memorial trees or send flowers to the family in memory of Michael Mandt, please visit our flower store.