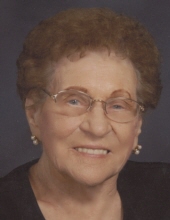 Mildred "Millie" Folstrom, age 99, of Fosston, MN, passed away on Thursday, February 23rd, at Essentia First Care Living Center in Fosston. Funeral services will be held at 3:00 p.m. on Wednesday, March 1st, at Kingo Lutheran Church in Fosston with the Rev. John Ragan officiating. Interment will be in Kingo Lutheran Cemetery, Fosston. Visitation will be held for one hour prior to the service on Wednesday at the church. Arrangements are with the Carlin Funeral Home of Fosston and messages of condolence may be sent at www.carlinfuneral.com.Mildred Naomia Roux was born on December 6, 1917 in Columbia Township, rural Lengby, Minnesota to parents William Brud and Esther Josephine Vezina Roux. She attended rural school at Columbia Heights school in Columbia Township. Millie grew up on a farm where her father milked cows and cleared wooded areas for fields.Mildred was united in marriage to John "Jack" Folstrom on November 14, 1936 in Mahnomen County. Millie and Jack had 10 children, the first born in 1937 and the last born in 1946. The family moved to the Twin Cities area and, in addition to raising her family, Millie worked as a cook. She started her own lunch counter and later cooked for the Salvation Army kitchen at Silver Lake. In 1982, they moved back to Fosston and Millie worked at the Hamburger Hut for several years. Jack passed away on January 24, 1984. She has lived in Fosston since that time and now has been a resident at Essentia First Care Living Center. She was a member of Kingo Lutheran Church in Fosston. She will be dearly missed by her family.Survivors include her children, Gloria Bergson of Moorhead, MN, Maynard (Jeanie) Folstrom of Isanti, MN, and Dale (Peggy) Folstrom of Circle Pines, MN; brother, Milo (Eileen) Roux of Fosston; and sister, Audrey Austin of New York, NY; sister-in-law, Gloria Roux of Fosston; grandchildren, great grandchildren and great great grandchildren; nieces, nephews and cousins.She was preceded in death by her husband; sons, Harvey, Clayton and Dennis; daughters, Phyllis Marie Bachard and Joyce May Leier; brothers, Marlin and Kenny; and sister, Curdella.Honorary Pallbearers: All of Millie's family and friendsActive Pallbearers: Millie's grandchildren

To order memorial trees or send flowers to the family in memory of Mildred Folstrom, please visit our flower store.