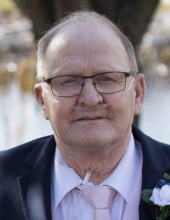 Miles Osland, age 74, of Moorhead, MN, and formerly of Erskine and Mentor, passed away on Friday, August 11th, at Sanford Hospital in Fargo, ND. Memorial services will be held at 11:00 a.m. on Wednesday, August 16th, at Grace Lutheran Church in Erskine with the Rev. Timothy Lundeen officiating. Interment will be in Fairview Cemetery, rural Erskine. Visitation will be held from 5:00 p.m. to 7:00 p.m. with a 7:00 p.m. prayer service on Tuesday, August 15th, at the Carlin Funeral Home in Erskine Family will also greet friends for one hour prior to the service on Wednesday at the church. Arrangements are with the Carlin Funeral Home of Erskine and messages of condolence may be sent at www.carlinfuneral.com.Miles Leroy Osland was born on September 17, 1942 in Grand Forks, North Dakota to parents Eddie and Lois McGraw Osland. He grew up in Buxton, North Dakota and, in 1960, moved to a farm near Mentor, Minnesota.Miles was united in marriage to Margaret A. Leuck at St. Lawrence Catholic Church in Mentor. They farmed south of Maple Lake and raised five children. In 1985, he moved to East Grand Forks, Minnesota. Miles then lived on a lake near Erskine and has currently been living in Moorhead, Minnesota. Miles enjoyed spending time at the lake, sharing stories and spending time with family and friends.He is survived by his five children, Mike Osland of Moorhead, MN, Mark (Wanda) Osland of Lindstrom, MN, Matthew (Beatriz) Osland of Fargo, ND, Mitchell (Melissa) Osland of Moorhead, MN, and Michelle (Tim) Tranby of Moorhead, MN; 15 grandchildren, 3 great grandchildren; two brothers, George (Patsy) Osland of McIntosh, MN and Harold (Evelyn) Osland of Manito, IL.He was preceded in death by his parents; and his brother, Elmer "Eddie" Osland.

To order memorial trees or send flowers to the family in memory of Miles Osland, please visit our flower store.