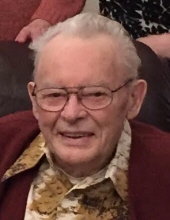 Morris Moan, age 90, of McIntosh, MN, passed away on Saturday, June 24th, at his daughter's home in Maple Grove, MN. Funeral services will be held at 1:00 p.m. on Thursday, June 29th, at Trinity Free Lutheran Church, rural McIntosh, with the Rev. Karl Anderson officiating. Interment will be in the church cemetery. Visitation will be held for one hour prior to the service on Thursday at the church. Arrangements are with the Carlin Funeral Home, serving McIntosh. Messages of condolence may be sent at www.carlinfuneral.com. Morris Sigward Moan was born on August 1, l926 to Bennie & Elida (Klemmetson) Moan on their farm north of McIntosh. He attended country school at Hillside School north of McIntosh for 8 years before staying home to help his father on the farm. He was a teenager when he personally put his trust in Christ as his Savior during a time of revival in the area. Morris was married to Audrey Bakken of Fertile on June 15, 1950. They met at a Deeper Life Conference in Minneapolis. They lived and farmed on the Moan farm for the entire 58 years of their marriage until Audrey died on August 22, 2008. Morris was an active member of Trinity Lutheran Church, rural McIntosh, for most of his life. His service included deacon, treasurer, Sunday School teacher, and other positions. When their 5 children were growing up, Morris enjoyed having the whole family sing together in area churches. He served on the Lutheran Colportage Board of Minneapolis for several years. Morris lived on the farm where he was born for 89 years. Morris loved his Savior, loved God's Word, and regularly prayed for his children and grandchildren by name - that none would be missing in Heaven. Morris passed away on Saturday, June 24, 2017 at the home of his daughter in Maple Grove, where he had lived the last 1½ years.Morris was preceded in death by his parents, wife Audrey, sister Delores Grothe and her husband Philip. He is survived by his 5 children: Linda (Lyndon) Korhonen of Plymouth, MN; Larry of Mesa, AZ; Judy (Peter) Franz of Maple Grove; Steven (Jennifer) of McIntosh; and Jerry (Rebecca) of Corcoran, MN.; 16 grandchildren & 18 great-grandchildren. Blessed be his memory

To order memorial trees or send flowers to the family in memory of Morris Moan, please visit our flower store.