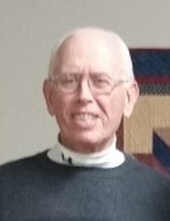 Neil R. Bursheim, age 79, of McIntosh, MN, passed away peacefully on Monday, May 4th, at Essentia Health Hospital in Fosston from complications of leukemia. Private graveside services will be held at Immanuel Lutheran Cemetery in McIntosh.Arrangements are with Carlin Family Funeral Service of McIntosh and messages of condolence may be shared at www.carlinfuneral.com. The service will be recorded and viewable on the Carlin website later in the day on Saturday.

Neil Robert Bursheim was born on April 13th, 1941, to parents Robert M. and Meredith (Raaen) Bursheim.   He was baptized and confirmed into the Lutheran faith at Dovre Lutheran Church in Winger.  Neil attended school in Fosston through the 8th grade, at which time he transferred to Oak Grove High School in Fargo to pursue his talent as a violinist.  Upon completion of high school, Neil attended Interstate Business College.

Neil married Carol Eleanor Anderson on August 5th, 1962, in McIntosh.  Neil and Carol had two children, Neil Ro bert Jr. (Bob) and Rebecca Ann (Becky).  They moved to Moorhead where Neil worked for Elliot Packing Company as a cooler foreman and delivery driver.  The family moved back to McIntosh in 1971 and started Neil’s Quality Meats where he worked until ill health forced his retirement.

Survivors include his wife, Carol of McIntosh; 2 children, Son Bob (Laura) of McIntosh and daughter Becky (Roosevelt) of Waldorf, MD.

To order memorial trees or send flowers to the family in memory of Neil Bursheim, please visit our flower store.