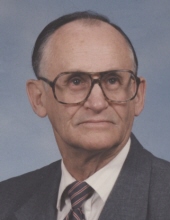 Norman L. Anderson, age 93, of Fosston, MN, passed away on Monday, October 30th, at Cornerstone Living Extended Care in Fosston. Funeral services will be held at 2:00 p.m. on Friday, November 3rd, at Bethel Assembly Church in Fosston with Pastor Seth Johnson officiating. Interment will be in Varnes Lutheran Cemetery, rural Fertile, MN. Visitation will be held from 5:00 p.m. to 7:00 p.m. with a 7:00 p.m. prayer service on Thursday, November 2nd, at the Carlin Funeral Home in Fosston. There will also be reviewal for one hour prior to the service on Friday at the church. Arrangements are with the Carlin Funeral Home of Fosston and messages of condolence may be sent at www.carlinfuneral.com. Norman Lauritz Anderson was born on June 17, 1924 in Columbia Township, rural Bagley, Minnesota to parents Andrew and Ingeborg Rodland Anderson. He was baptized on September 28, 1924 and his baptismal sponsors were Hans and Hilda Sovick and Lars Magnuson. He was confirmed on May 21, 1939. Norman was both baptized and confirmed at St. Peter Lutheran Church near his home.Norman attended the Maple Hill country school. After his schooling, he farmed with his dad, then farmed on his own on the home farm for a couple of years. He worked for George Borud at George's Service as an attendant and specialized in radiator repair, which he was very good at. He later worked for George Haugen doing radio and television repair. During most of these years he also worked for various farmers in the area, and for Sid Johnson in particular on his potato farm. He also volunteered a lot at the hospital doing snow removal and maintenance work in recent years. He was married to Helen Huseby on November 15, 1981 at Varnes Lutheran Church near Fertile, Minnesota. Helen passed away in 1987.He was a member of Bethel Assembly Church in Fosston. Over the years, Norman ministered by sharing his musical talents at area events and at nursing homes. Norman is survived by one sister, Elsie Gullickson of Fertile, MN; one brother, Erling Anderson of Fosston; sisters-in-law, Ione Anderson and Marilyn Anderson, both of Fosston; and many nieces, nephews and cousins. He was preceded in death by his parents; his wife, Helen; four brothers, Joseph, Ingvald, Alf and Robert; five sisters, Agnes Potter, Thelma Hanson, Mabel Anderson, Norma Brown and Esther Carlson; and a very dear friend, Gladys Anderson. Pallbearers will be Daniel Anderson, Steve Anderson, Andrew Quam, Peter Quam, Matthew Johnson, and Troy Gullekson.

To order memorial trees or send flowers to the family in memory of Norman Anderson, please visit our flower store.