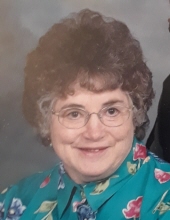 Oralee Bailey, age 83, of Erskine, MN, passed away on Tuesday, March 12th, at Altru Hospital in Grand Forks, ND. Funeral services will be held at 2:00 p.m. on Saturday, March 16th, at New Journey Church in Fosston with the Rev. Josiah Hoagland officiating. Interment will be in the Bailey Family Cemetery, rural Erskine, in the spring. Visitation will be held from 12:30 p.m. until the time of service on Saturday at the church. Arrangements are with the Carlin Funeral Home of Erskine and messages of condolence may be sent at www.carlinfuneral.com. In lieu of flowers memorials are preferred to New Journey Church Missions Team or Heifer International.Oralee Janice Cain was born on December 3, 1935 in Amery, Wisconsin to parents Orin and Elena Kelley Cain. She grew up and graduated from high school in Amery. After high school, she attended Hamline University in St. Paul to become a nurse.Oralee was united in marriage to Jack Bailey on August 22, 1959 in St. Paul. They remained in St. Paul until 1967 when they moved to the North Shore near Duluth, Minnesota. She attained her Bachelor of Science degree in Nursing from the University of Minnesota Duluth. She then worked as a registered nurse at St. Luke's Hospital in Duluth for many years, specializing in gerontology.In the 1980s, they moved back to Jack's home town of Erskine, Minnesota, where they operated the Union Lake Sarah Campground. They built a home on the long-time Bailey family land near Lake Sarah, where they lived for 25 years.Oralee remained active in her career by working at the Fosston Hospital and with Polk County Public Health. She became a member of New Journey Church in Fosston, where she participated in Missions organizing and quilting groups. She enjoyed quilting, sewing, embroidery, cooking and baking.Survivors include her loving husband of 59 years, Jack; five children, Terry (Navin) of New York, NY, Todd (Alex) of Cardiff, UK, Scott (Kimberly) of Asheville, NC, Kelly (Heidi) of Erskine, MN, and Heather (Travis) Marshall of St. Peters, MO; six grandchildren, Kelton, Justus, George, William, Bennett, and Chandler; twin brother, Orison; brother, Melvin; and two sisters, Lynnette and Violet. Nieces, nephews and cousins also survive.She was preceded in death by her parents; brothers William, Orin, Homer, Carlin, and Dallas; and sisters Miriam, Nina, Lucienne, and Lois.

To order memorial trees or send flowers to the family in memory of Oralee Bailey, please visit our flower store.