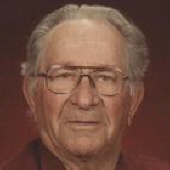 Orlin Thompson, age 89 of McIntosh, MN passed away on Wednesday, October 28th at McIntosh Senior Living in McIntosh. Funeral services will be held on Monday, November 2nd at 11:00 AM at Our Savior's Lutheran Church in McIntosh with Rev. Gordon Syverson officiating. Visitation will be held for one hour before the funeral at the church on Monday morning. Interment will be at Asphult Cemetery, rural McIntosh, and the Carlin-Hoialmen Funeral Home serving McIntosh is in charge of the arrangements. Messages of condolence may be sent to carlinhoialmen.com.Orlin B. Thompson was born August 15, 1926, to parents Oscar and Agnes (Newton) Thompson. He was born at the Thompson family farm NE of McIntosh in Hill River Township which was homesteaded by the family in the 1880's. He resided there until his recent move to McIntosh Senior Living in June of this year.He was baptized and confirmed at Our Savior's Lutheran Church in McIntosh, MN. He bought and took over the farm in 1956; where he had a dairy and small grain operation. Orlin loved farming, milking the cows, not so much. He was however, thankful for the steady income it provided for his growing family.On June 27th, 1953 he married Arlys Lucille Weiby at Rodnes Lutheran Church in rural Erskine, MN. Together they farmed and raised their three children; Jody, Carol and Robert. Arlys passed away August 10, 1996, at which time they had been married 43 years.Orlin was a loving husband, patient father and treasured grandfather. As a couple, Orlin and Arlys enjoyed spending time and mentoring several youth throughout the years. They had many friends of various ages. He was also an avid hunter and harvested a deer last year. He also spent many summer afternoons fishing with friends and family at Jeppson Lake. Orlin passed away on October 28, 2015 at the age of 89. He will be dearly missed.Survivors include his children Jody (David) Lende of Lynnwood, WA, Carol (George Michael) Longtin of Erskine, MN, Robert (Janet) Thompson of McIntosh, MN: seven grandchildren - David (Michelle) Melby of Sandwich, MA, Cole (Kimberly) Longtin of West Fargo, ND, Jered (Bethany) Longtin of Gilbert, IL, Troy (Ariel) Longtin of Moorhead, MN, Jami Bergh of Beltrami, MN, Kayla Bergh of Grand Forks, ND, and Angie Thompson of McIntosh, MN. Great-grandchildren Kaitlin and Emily, Myah, Hunter and Landon, Kason and Lennon and Ainsley. He has one brother Donald (Fern) Thompson of Edmonds, WA and one sister Lois McLaughlin of Lynnwood, WA.Orlin is also survived by sisters-in-law Gloria Ostgard, of Fosston, MN, Karen Zeager of Bay Village, OH, Dorothy (Wayne) Smith of Lengby, MN and Rosalie Weiby of Erskine, MN. He also has many nieces and nephews.He was preceded in death by his wife, parents, sister, Betty Larson and brother, Roy Thompson.Blessed be his memory

To order memorial trees or send flowers to the family in memory of Orlin Thompson, please visit our flower store.