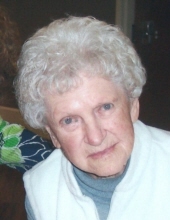 Palma "Polly" Simonson, age 96, of Fosston, MN, passed away on Saturday, October 5th, at Essentia Health Living Center in Fosston. Funeral services will be held at 2:00 p.m. on Thursday, October 10th, at Hope Lutheran Church in Fosston with the Rev. Jane Ekholm officiating. Interment will be in Hope Lutheran Cemetery, Fosston. Visitation will be held from 5:00 p.m. to 7:30 p.m. with a 7:30 p.m. prayer service on Wednesday, October 9th, at the Carlin Funeral Home in Fosston. There will also be reviewal for one hour prior to the service on Wednesday at the church. Arrangements are with Carlin Family Funeral Service of Fosston and message of condolence may be sent at www.carlinfuneral.com. Palma Marcella Simonson was born on November 12, 1922 at Spring Grove, Minnesota to parents Steiner and Caren (Oseth) Walstad. She was baptized in the Lutheran faith in Spring Grove. In1933 the family moved from Spring Grove to McIntosh, MN and was confirmed at Trinity Lutheran Church. Later the family moved to Fosston, MN. On October 14, 1948 she married Melvin Simonson. They resided in Austin, Minnesota where Melvin was employed at a furnace company for two years. Later they returned to McIntosh, Minnesota where they farmed for three years. On June 3, 1952 their son Dennis was born and in 1954 they settled near Fosston, Minnesota where they operated a dairy and grain farm. Melvin passed away on June 17, 1993 and Polly continued to live on the farm until 2016 when she entered the nursing home. During her life Polly was employed at the Green Lantern Café of Fosston, the Fosston Potato Plant, Artic Cat in Thief River Falls and Midway Care Center of Fosston. Polly loved to work on the farm with milking cows, raising hogs and chickens as well as driving tractor. She was a good cook and loved to bake bread, buns, pies and cookies. Her grandchildren and great grandchildren were very important to her and her many pets over the years. She was a member of the Heier Hobby Club for many years. Polly was a member of Hope Lutheran Church in Fosston. She passed away on October 5, 2019 at First Care Living Center at the age of 96.Survivors include her daughter-in-law, Margot of rural Fosston; two grandchildren, Mark (Brook) of McIntosh and Marcella of Fosston; seven great-grandchildren, Austin (Eden Mickelson) of Fargo, ND, Logan (Jenna Wiersma) of Winger, MN, Olivia of Fargo, ND, Zachary of Winger, MN, Noah Roragen of McIntosh, MN, Chase Pierce of Fosston, MN and Michael Simonson of Fosston, MN, sister-in-law, Agnes Gaetz of Fosston, MN, brother in-laws, Hilmer (Marion) Simonson of Richfield, MN and Lloyd Schleicher of McIntosh, MN. Several nieces and nephews also survive. She was preceded in death by her husband Melvin, son Dennis, one granddaughter Michelle, her parents and ten siblings.

To order memorial trees or send flowers to the family in memory of Palma Simonson, please visit our flower store.