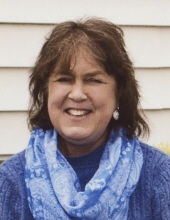 Roberta "Robbie" Reck, age 62, of Fosston, MN, passed away on Tuesday, October 31st, at Essentia Hospital in Fosston surrounded by her loving family. A celebration of her life will be held at 11:00 a.m. on Saturday, November 4th, at Kingo Lutheran Church in Fosston with the Rev. John Ragan officiating. Interment will be in Landsverk Cemetery, rural Fosston. Visitation will be held from 5:00 p.m. to 7:00 p.m. with a 7:00 p.m. prayer service on Friday, November 3rd, at the Carlin Funeral Home in Fosston. Family will also greet friends for one hour prior to the service on Saturday at the church. Arrangements are with the Carlin Funeral Home of Fosston and messages of condolence may be sent at www.carlinfuneral.com. Roberta Jean Roysland was born on January 26, 1955 in Fort Ord, California where her father, Robert, and her mother, Mary Sinjem Roysland, were stationed. She attended first grade through fifth grade at Erskine Elementary and grades six through twelve at Fosston Public Schools, graduating from Fosston High School in 1973.Robbie attended Moorhead State University and graduated in 1977 with a Bachelor of Science degree in Elementary Education with a certificate for teaching Kindergarten and a minor in health education. She taught summer migrant school in Moorhead, and held elementary teaching jobs at Stephen, Minnesota, West Fargo, North Dakota, and Underwood, North Dakota. She volunteered at Moorhead Public Schools, including as Room Mother, as a member of Parent Advisory Council, Superintendent Advisory Council and Special Needs Advisory Council. She also was Co-Chair for the first Clay County Vision Loss Support Group for three years.She was a member of Kingo Lutheran Church in Fosston and past member of Augustana Lutheran Church in Underwood and Good Shepherd Lutheran Church in Moorhead. At Kingo Lutheran, she enjoyed singing in the Senior Choir and co-teaching Sunday School music. Vacation Bible School and Sunday School teaching were enjoyed by Robbie at Good Shepherd Lutheran. Robbie was married on July 7, 1979 at Kingo Lutheran Church. She received the joy of her life on October 12, 1984, when her adopted son, Eric, was born. Eric passed away on January 3, 2007. She loved four dogs, the last two of which were rescues. She enjoyed nature, the oceans, the Gulf of Mexico, the Everglades, and the beautiful redwoods of California. Her favorite nature spots were the Minnesota grain fields, lakes, and wooded areas. Laughter was shared with her mom, creating silk and pine cone creations. Robbie also enjoyed all kinds of music. She attended many musicals, including The Lion King on Broadway which was her favorite. She was preceded in death by her father, Bob Roysland; sister, Pat Roysland; son, Eric Reck; grandparents, Emma and Orlando Sinjem and Halvor and Thora Roysland; uncle, "Skip" Roysland; aunts, Patricia Sinjem and Kay Nelson; and cousin, Jack Nelson.She is survived by her mother, Mary Roysland of Fosston, MN; brother, Mike (Kim) Roysland of Fosston; niece, Kelly (Eric) Roysland Curry and their son, Brekken, of Minneapolis, MN; nephew, Josh Roysland of Fosston; aunt, Bernice Roysland of Fergus Falls, MN; and her former husband, George Reck of Aurora, MN; as well as other relatives.Honorary Pallbearers will be All of her dearly loved family and friends.

To order memorial trees or send flowers to the family in memory of Roberta Reck, please visit our flower store.