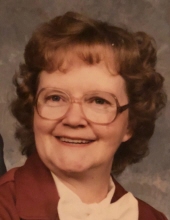 Ruby Wold, age 89, formerly of Fosston, MN and rural Trail, MN, passed away on Monday, June 11th, at the Pioneer Memorial Care Center in Erskine. Funeral services will be held at 1:00 p.m. on Friday, June 15th, at Hope Lutheran Church in Fosston with the Rev. Paul Magelssen officiating. Interment will be in Zion Lutheran Cemetery, rural Fosston. Visitation will be held for one hour prior to the service on Friday at the church. Arrangements are with the Carlin Funeral Home of Fosston and messages of condolence may be sent at www.carlinfuneral.com.Ruby Ione (Dunrud) Wold was born April 23, l929 to parents William and Ragna (Jacobson) Dunrud. She was born and raised on a farm homesteaded by Hans and Mathia Dunrud in Brandsvold Township of rural Fosston. She was baptized and confirmed at Zion Lutheran Church. Ruby attended Cloverdale Country School through the 8th grade, after which she attended Fosston High School, graduating in 1947. She continued her education in Thief River Falls and then worked there briefly. On March 25, 1950, Ruby was united in marriage to Vernon Norris Wold. They lived on the farm that was homesteaded by Vernon's grandparents, Erick and Christina Jacobson, in Eden Township of rural Trail. There they raised three children, Joanne, Sandy and Bradley. She was an active member of Zion Lutheran Church, participating in various areas including children's education, Ladies Aid, and Bible studies. Following the closing of Zion in 2012, her membership continued at Hope Lutheran Church.Faith and family were Ruby's priorities. Her incredible servant heart was evidence of that. Her quick wit was recognized and greatly appreciated by her family! She enjoyed baking and cooking for her family, especially her grandkids. She also enjoyed sewing, quilting, flower gardening, bird watching, and reading. That love of reading was passed on to her three children and grandchildren! Ruby was always up for a fun game of Yahtzee and doing puzzles. When Vern and family or friends were sharing their love of music, she was always there supporting and enjoying their company and talents. Ruby was an active member of the Eden Homemakers Club. Following Vernon's death in 2012, after 62 years of wonderful marriage, she moved from the farm to Cornerstone Assisted Living in Fosston. In 2016 she moved to Pioneer Memorial Care Center in Erskine, Minnesota. Ruby passed away peacefully on June 11 at Pioneer Memorial Care Center, with her family nearby, at the age of 89. She was truly dedicated to her family as a wife, mother, grandmother, and great grandmother. Survivors include two children: Joanne (Robert) Scott of Maple Grove, MN and Bradley (Marie) Wold of Harris, MN; son-in-law Prakash Mathew of Fargo, ND; seven grandchildren, Trevor (Emily) and Chris Mathew, Josh (Keri) Scott, Jenna (Phil) Tolbert, Sam, Becca, and Jake (Emilee) Wold; great grandchildren, Berit and Wyatt Scott, Liam and Lochlann Tolbert. She is also survived by 3 sisters, Mavis (Richard) Linder of Bradenton, FL, Marion (Jack) Hansel of Easanolle, GA, and Verna (David) Heaney of Tucson, AZ. and sisters-in-law Judy Dunrud, Carol Wold, and Arlene Wold, and brother-in-law, Kenny Wold. Many nieces and nephews also survive. She was preceded in death by her loving husband of 62 years, Vernon, her loving daughter, Sandy Mathew, her parents, William and Ragna Dunrud, mother and father in-law, Selmer and Selma Wold, brothers, Morris and Lloyd Dunrud, and foster brother, Don Edwards, sisters-in-law, Jeanette Dunrud, Esther Sundbom, Myrtle Osmonson, brothers-in-law, Hugo Sundbom, Blanchard Osmonson, and Lloyd Wold. She will be greatly missed. Blessed be her memory.

To order memorial trees or send flowers to the family in memory of Ruby Wold, please visit our flower store.