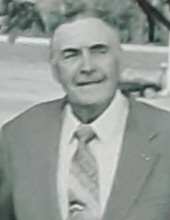 Russell Carl Nelson, Jr., age 90, of Gully, MN, and formerly of Redby, MN, passed away on Wednesday, January 14th, at his home in Gully. Due to the pandemic, a Celebration of Life will be held in the spring/summer. Interment will be in St. Antipas Episcopal Cemetery, Redby. Arrangements are with Carlin Family Funeral Service of Fosston and messages of condolence may be shared at www.carlinfuneral.com. Russell Carl Nelson, Jr. was born on September 21, 1930 in Newport, Rhode Island to parents Russell, Sr. and Sara (Thompson) Nelson. He joined the United States Navy in 1947 and was a veteran of the Korean and Vietnam wars, where he was decorated and received numerous commendations including the Bronze Star and two Purple Hearts. When he was stationed in New York City, he met and married Joan Pemberton on March 8, 1957. He retired from active and inactive Naval service on July 1, 1977.Russell moved his family to his wife's homeland to Redby, Minnesota where he enjoyed hunting, fishing, and cutting firewood. He also liked traveling back to the east coast to visit his family.Russell passed away on Thursday, January 14, 2021 at his home in Gully, Minnesota at the age of 90 years.He is survived by his children, Russell III (Jennifer) Nelson of Bemidji, MN, Cathy (Quinten) Good of Trail, MN, Lori (Roger) Good of Gully, MN, and Eric Nelson of Redby, MN; grandchildren, Liam, Tris, Kellen, Regina, Michael, Sarah, and Tyler; great grandchildren, Lucas, Jade, Blake, Wyatt, Adelyn, Russell, Gabriel, and Rylin; nieces, Suzan and Michelle; and nephew, Joey. Also surviving are special nephew, Jeffrey Scott Pemberton; and special daughter, Janet Gail Beaulieu.He was preceded in death by his wife on January 28, 2018; his father, Russell Carl Nelson and mother, Sarah (Thompson) Nelson; brother, Theodore Nelson; sister, Gail Purcell; and grandson, Ryan Nelson.May his memory be blessed!

To order memorial trees or send flowers to the family in memory of Russell Nelson, Jr., please visit our flower store.