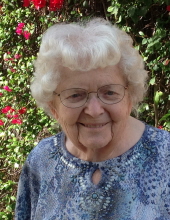 Ruth Davidson, age 101, of Fosston, passed away on Monday, August 12th, at Essentia Health Living Center in Fosston. Funeral services will be held at 2:00 pm on Monday, August 19th, at Kingo Lutheran Church in Fosston with the Rev. John Ragan officiating. Interment will be in Kingo Lutheran Cemetery, Fosston. Visitation will be held from 5:00 pm to 7:00 pm with a 7:00 pm prayer service on Sunday, August 18th, at the Carlin Funeral Home in Fosston. There will also be reviewal for one hour prior to the service on Monday at the church. Arrangements are with Carlin Family Funeral Service of Fosston and messages of condolence may be sent at www.carlinfuneral.com.Ruth (Morgan) Davidson was born in Pipestone, MN on June 1, 1918, to parents Walter and Magnhild Morgan. The family moved several times and eventually settled on a farm north of McIntosh, MN where Ruth attended a country school, completing 8th grade. Ruth and her sister Mildred stayed with and worked for Alfred and Lorraine Voxland, helping with the children and housework. It was there that she met Glen, who also worked for the Voxlands. They were married on Ruth's Birthday, June 1st, 1940, in an outdoor wedding on her sister Tina's farm near Winger, MN. In 1948 Glen and Ruth bought a small home across from the fairgrounds in Fosston. Glen built several additions to the house, more than doubling it in size. The house is still owned by the family, and her children stay there when visiting.Ruth was mainly a stay at home mother to her four children. Every Saturday she would bake bread and cinnamon rolls, and always had a big selection of cookies and bars ready whenever anyone stopped by for coffee, or the numerous coffee breaks she and Glen enjoyed. Ruth's sisters and their families were a big part of her life as they all lived close by and spent lots of times together. She was a member of Kingo Lutheran Church for over 70 years, and taught Sunday School, VBS, Friday School, Ladies Aid, and was an active circle member who often led the Bible study. Church and its activities have always been an important part of Ruth's life. Ruth worked a few years in the 1970s at the Fosston Potato Plant and also was an assistant with Head Start out of Oklee. Ruth always had a garden and did lots of canning and making jams and jelly to go along with the fresh bread she baked. She also loved making quilts; each of her grandchildren received one. In their retirement years, Glen made many different wood projects and Ruth became the painter of his handiwork.Ruth made many trips to CA to visit her daughter Mary and family. In the last ten years she spent her winters in CA, enjoying the warm weather. Her favorite place was sitting in the sunshine on Mary's patio enjoying the birds and flowers. Roses were her favorite and Mary has fifty of them. She still traveled out to CA last winter at 100 years of age!Ruth passed away on August 12, 2019 at Essentia Health Living Center in Fosston, at the age of 101 years, 2 months, and 12 days. Ruth is survived by her children: Mary Wilson, El Cajon, CA; Jerry (Susan) Davidson, Bagley; Ron (Mary) Davidson, Vail, CO; and Ilene (Gary) Gauger, Edwards, CO. Grandchildren: Jon Davidson, Bagley; Kevin (Kimberly) Wilson, El Cajon, CA; Keith (Suzanne) Wilson, Golden, CO; Corey (Sammi) Davidson, Bagley; Karen (Mike) Richardson, El Cajon. Twin step Great Grandsons: Steven and Shaun of Golden, CO. Great Grandchildren: Tyler (Ashley) Davidson; Kyle & Kaleb Wilson; and Daniel & Sarah Wilson. Great GreatGrandchildren: Luke & Jonathan Davidson. She was preceded in death by her parents, husband Glen in 1996, brother Homer; sisters: Josephine Morgan, Jessie Thompson, Tina Voxland, and Mildred Anderson; son-in-law David Wilson, and many other relatives and family. She will be greatly missed!

To order memorial trees or send flowers to the family in memory of Ruth Davidson, please visit our flower store.