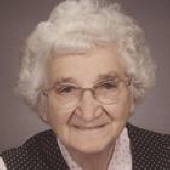 THE VISITATION FOR RUTH HANSON HAS BEEN MOVED TO GRACE LUTHERAN CHURCH IN ERSKINE. IT WAS ORGINALLY SET TO BE IN THE FUNERAL HOME IN ERSKINE. THE VISITATION HOURS WILL REMAIN THE SAME. 5:00 P.M. TO 7:00 P.M. WITH A 7:00 P.M. PRAYER SERVICE.Ruth Hanson, age 94, of Erskine, MN, passed away on Thursday, March 12th, at Riverview Hospital in Crookston, MN. Funeral services will be held at 2:00 p.m. on Tuesday, March 17th, at Grace Lutheran Church in Erskine with the Rev. Timothy Lundeen officiating. Interment will be in Fairview Cemetery, rural Erskine. Visitation will be held from 5:00 p.m. to 7:00 p.m. with a 7:00 p.m. prayer service on Monday, March 16th, at the Carlin-Hoialmen Funeral Home in Erskine. There will also be reviewal for one hour prior to the service on Tuesday at the church. Arrangements are with the Carlin-Hoialmen Funeral Home of Erskine and messages of condolence may be sent at www.carlinhoialmen.com. Ruth M. Olson Hanson was born on March 27, 1920 in Mentor, Minnesota to parents Edwin and Ingeborg Hagen Olson. She was the youngest in a family of 10 children and grew up and attended school in Mentor. In her youth, Ruth worked as a caregiver at the Hanson farm for her future mother-in-law, Clara Hanson.  Ruth was united in marriage to Swan and Clara Hanson's son, Arvid, on April 11, 1942. After their marriage, they bought the Hanson farm. The same farm where Ruth and Arvid first met is where they lived and raised their three children, Verlene, Roger and Russell. In 1977 they built a home in Erskine and moved into town. Arvid passed away on January 11, 1990. Ruth continued to live at home in Erskine until recently when she moved to the Pioneer Memorial Care Center in Erskine.  Ruth was very active during her working years. She worked several years for Denny Berger as a store clerk and "right hand lady" at his general store. She was a babysitter for multiple families in the Erskine area for many years and was invaluable as custodian at Grace Lutheran Church for over 10 years. It was only after she broke her hip at the age of 87 that she was forced to retire.  Ruth was also an active and dedicated member of Grace Church. As church and worship were a very important part of her life, Ruth taught Sunday School, led Monday morning Bible study for many years (led through the entire Bible), and, along with her sister Clara, made literally hundreds of quilt tops for donation by the  church. She also gave of her time locally at the food shelf for many years. Ruth was a giving person - God truly gave her the heart of a servant. Ruth is survived by her three children, Verlene "Vicki" Aaker of Erskine, Roger (Pam) of Wichita, KS, and Russell (Connie) of Arlington, TX; nine grandchildren, Robert, Ryan, Aaron, Jodie, Amy, Jason, Corey, Kelly, Brooks. 16 great grandchildren; three great-great grandchildren; one sister, Elsie Patterson of Thief River Falls, MN; and sister-in-law, Vivian Hanson of Erskine. Nieces, nephews and cousins also survive. She was preceded in death by her husband, Arvid; her parents; eight sisters and one brother.

To order memorial trees or send flowers to the family in memory of Ruth Hanson, please visit our flower store.