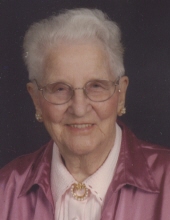 Ruth Holman, age 99, of Fosston, MN, passed away on Monday, October 2nd, at her home in Fosston. Funeral services will be held at 2:00 p.m. on Saturday, October 7th, at Kingo Lutheran Church in Fosston with the Rev. John Ragan officiating. Interment will be in the Bagley City Cemetery, Bagley, MN. Visitation will be held for one hour prior to the service on Saturday at the church. Arrangements are with the Carlin Funeral Home of Fosston and messages of condolence may be sent at www.carlinfuneral.com. Ruth Alice Oftedahl was born on April 27, 1918 in Clearwater County, rural Bagley, Minnesota to parents Lars and Carrie Johnson Oftedahl. She grew up and attended country school in Clearwater County. She was united in marriage to Lloyd Smith in July of 1936. To this union, seven children were born. She was married to Frank Fletcher in August of 1964. After his passing, she lived and worked in several different places. In September of 1982, she married Walter Holman and they lived near Mahnomen, Minnesota. In 1995, she moved to Fosston where she has resided since. She was a charter member of Grace Free Lutheran Church in Bagley and was currently a member of Kingo Lutheran Church in Fosston. Ruth had a need to keep busy doing many different crafts and also wrote poetry. A poem she wrote about 9-11 was sent to President Bush by her son. The President sent her a thank you letter that she framed. Making pocket crosses was her latest craft that gave her life meaning to the end. Survivors include her children, Cleone Johnson of Fosston, Francis (Marilyn) Smith of Bemidji, MN, Franklin (Sharon) Smith of Monticello, MN, and Darlene Novacek of East Grand Forks, MN; 8 grandchildren, 17 great grandchildren, and 2 great great grandchildren; step-son, Curtis Holman of IL; four step-daughters, Mary Gillis of St. Cloud, MN, Caroline Stanhope of FL, Nancy Richards of FL, and Beverly of CT. Numerous nieces and nephews also survive.She was preceded in death by her husbands, Frank Fletcher and Walter Holman; three sons, Myrl Smith, Clayton Smith, and Laverne Smith; two grandsons, Lloyd Smith and Daniel Smith; sons-in-law, Darrell Novacek and Larry Johnson; three brothers, Harold Oftedahl, Lars Oftedahl, and Albert Oftedahl; and two sisters, Helen Sorenson and Elsie Christenson.

To order memorial trees or send flowers to the family in memory of Ruth Holman, please visit our flower store.