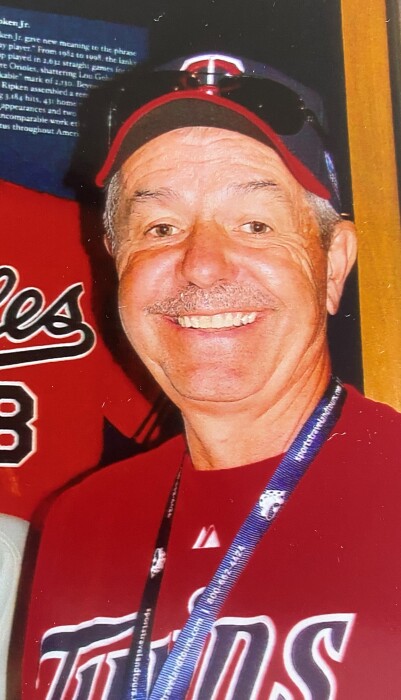 Tom Sedler, age 73, of Fosston, MN, passed away on Wednesday, January 5th, at Sanford Hospital in Fargo, ND. A memorial service was held at Hope Lutheran Church in Fosston in January. Because of Covid, the service in January was limited to immediate family.

A graveside/inurnment service with military honors will be held at 10:00 a.m. on Saturday, June 18th, at the Columbarium at Hope Lutheran Cemetery in Fosston with the Rev. Jane Ekholm officiating. All are welcome to attend. Please bring your own chair if possible as seating will be limited outside. Military honors will be provided by the National Guard Honors Team.

In the spirit of Tom's love for golf, there will be a 4-Person Scramble golf event at the Fosston Golf Course beginning at 1:00 p.m., also on Saturday.

In lieu of a floral arrangement, please consider a memorial to Fosston Baseball, Fellowship of Christian Athletes or Loaves and Fishes Food Shelf. Information on the tournament, memorial contact persons, and tribute video are available at www.carlinfuneral.com and the Carlin Family Funeral Service Facebook page.

Thomas Craig Sedler was born on September 3, 1948, in Breckenridge, Minnesota to parents Vernon and Phyllis (Bladow) Sedler. He lived with his family in Hankinson, North Dakota through the tenth grade before moving to Cooperstown, North Dakota where he graduated from high school in 1966. He then attended Mayville State College where he played on the baseball team and received his bachelor’s degree in math education. After college, he got his first teaching job in Starkweather, North Dakota. He taught there for only a year before he was drafted into the Army.

Tom was united in marriage to Marcy Sigdahl on July 24, 1971, at American Lutheran Church in Tolna, North Dakota. They began their life living abroad in Germany where Tom was stationed. They spent two years in Germany before being transferred to Fort Leavenworth, Kansas where he took on the position of prison recreation director. He received his honorable discharge in 1975 and returned to Minnesota.

In the fall of 1975, the Sedler family moved to Oklee, Minnesota. It was in Oklee that Tom returned to the classroom teaching math and coaching multiple sports. Then, in 1984, their growing family moved to Climax, Minnesota where Tom took over as Principal at the high school. During this time, Tom also attended Moorhead State University and North Dakota State University, attaining a master’s degree and specialist in education degree.  In 1997, he took the job as Principal at Fosston High School, a position he held until his retirement in 2006. After retirement, when they weren’t in Fosston, you could find Tom and Marcy at their cabin on Lake Andrusia near Bemidji.

Tom loved sports. All sports. He was an umpire and referee at numerous events through the years. Tom was a familiar face and voice for many years at numerous Fosston High School sporting events. He was always there to help wherever he was needed.

Tom was a member of Hope Lutheran Church in Fosston where he served on several church boards; he also enjoyed time on the DAC board; was a foster parent and donated time giving respite care to those in need. In addition, he helped with Fellowship of Christian Athletes for over 20 years, from its beginnings in Fosston.

Tom loved yard work, keeping up with not only his own lawn, but those of his neighbors, and snowblowing and shoveling in the winter. He was a guy that was always willing to lend a helping hand.

He is survived by his wife of 50 years, Marcy, of Fosston; four sons, Ryan of Worthington, MN, Brett of Hallock, MN, Brady (Gwen) of Surprise, AZ, and Derek (Ashley) of Tempe, AZ; two brothers, Bruce (Julie) Sedler of Binford, ND, and Jeff Sedler of Cooperstown, ND; and 21 nieces and nephews.

He was preceded in death by his parents; and one sister, Barbara Bommersbach.

Blessed be his memory

To order memorial trees or send flowers to the family in memory of Tom Sedler, please visit our flower store.