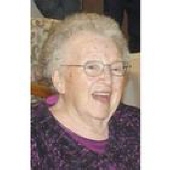 Tone P. Schmit, age 93, from Trail, MN passed away on Wednesday, April 6th at Essentia Health First Care Living Center in Fosston, MN. Funeral services will be held on Monday, April 11th at 2:00 PM at Samhold Lutheran Church in Gonvick, MN with Rev. Kris Snyder officiating. Visitation will be held for one hour before the funeral at the church on Monday afternoon. Interment will be at St. Charles Catholic Cemetery, rural Trail, MN, and the Carlin-Hoialmen Funeral Home of Fosston is in charge of the arrangements. Messages of condolence may be sent to carlinhoialmen.com.Tone Pencella Godtland was born October 8, 1922 on a farm south of Gonvick, MN to parents Peter and Nora (Herberg) Godtland. Tone was baptized at Samhold Lutheran Church on December 3, 1923. At age 12, the family moved to a farm north of Fosston, MN. She was confirmed at Zion Lutheran Church of rural Fosston on November 8, 1936. She continued her schooling at the Willow Side School southwest in Eden Township and graduated from Fosston High School in 1940. Her schooling continued at Aaker's Business College in Grand Forks, ND for one year of training, graduating in 1943. This resulted in a job at the Congress Candy Company as a bookkeeper working for a number of years.Tone met Leonard Schmit on a Sunday in May 1946 at a fish supper. Their engagement was announced on July 13th 1947 with marriage to follow on November 25th 1947, the same date her sisters, Esther and Magel, were married only in different years. They resided on the Schmit home farm near Trail, MN until 1993 when they moved into Gully, MN. She eventually moved into an apartment at the Gully Mall and to First Care Nursing Home in Fosston in November of 2009.Tone enjoyed visits, embroidery, cross stitch, sewing clothes and gardening in the early years, and her meals at the Gully Mall Cafe.She was a long standing member of the American Legion Auxiliary in Gonvick, the Trail VFW Auxiliary and the Community Club in Trail.Tone passed away April 6, 2016 at First Care Nursing Home with her family beside her at the age of 93.She is survived by three sons, Roger, Jerome (Nancy) of Trail, Lowell (Tonya) of Texas; three daughters, Karen (Ordell) Langseth of Gully, Penny (Kent) Smith of Warroad, MN and Patsy (Alfred) Broten of Park Rapids, MN; brother Dean (Diane) Godtland of Gonvick; grandchildren, Chad, Ryan, Kyle, Amanda, Tonya, Casey, Ryley, Joseph, John, and Shawna; great grandchildren, Tone, Mary, Joe, Evan, Lillian, Matthew, Sam, Ben, Alex, Savannah, Peyton, Zach, Gabby, Kimberly, Elijah; and numerous nieces, nephews and cousins also survive.She was preceded in death by her husband, Leonard in 1998, their sons Larry 1966, Milo 1973; and grandson Clinton; her parents; brothers Carl, Roy, Edwin, James, Arne, Irvin, Vernon, and one infant brother; and two sisters Magel Jorgenson and Esther Pletschett.Blessed be her memory

To order memorial trees or send flowers to the family in memory of Tone Schmit, please visit our flower store.