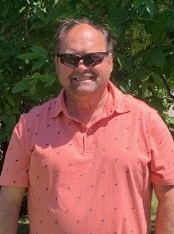 Tony Vedbraaten, age 63, of Fosston, MN, passed away unexpectedly on Thursday, September 22nd, at Sanford Medical Center in Thief River Falls. Funeral services will be held at 2:00 p.m. on Thursday, September 29th, at Kingo Lutheran Church in Fosston with the Rev. John Ragan officiating. Interment will be in Rosehill Cemetery, Fosston. Visitation will be held from 5:00 p.m. to 7:00 p.m. with a 7:00 p.m. prayer service on Wednesday, September 28th, at the Carlin Funeral Home in Fosston. There will also be reviewal for one hour prior to the service on Thursday at the church. Arrangements are with Carlin Family Funeral Service of Fosston. Livestream of the service and messages of condolence may be sent at www.carlinfuneral.com.

Anthony Reed Vedbraaten was born on November 7, 1958, in Fosston, Minnesota to parents Edward and Edith (Vraa) Vedbraaten. He grew up in Fosston and graduated from Fosston High School in 1976. After high school he started his career truck driving. Tony worked his entire life as a truck driver. He was currently working for Strata (Northern Sand and Gravel) where he has been a dedicated employee for over 30 years.

Tony was united in marriage to Deb Crotteau on June 9, 1990. They have lived in Fosston since that time.

Tony was a rough and gruff man on the outside, but soft and tender on the inside. He was always ready to lend a helping hand whether to shovel snow, help someone off the floor from a fall or fill someone’s fuel tank without saying anything, to forfeit his bragging rights.  Tony lived a simple life. The old shoes, coat and boots were always good enough, even when they had to be held together with duct tape.  He was content just to run up to the grocery store and visit with people he ran into there.  Tony loved to be social and could always strike up a conversation with a complete stranger.  If you lost him while shopping at a mall, you could always find him in the center talking to someone.  Tony loved getting company and made everyone who came over feel at home.  He enjoyed building a fire in the backyard, talking about the stars or telling stories that one never quite knew if they were true or not.  Although he loved to visit others, he was not one to go to other people’s houses just to visit.  He never wanted to feel like he was imposing on others, so apologies for the infrequent visits to your house.

Tony’s pride and joy was his family. He never really told each family member how proud he was of them, that was something he tucked away in his heart. However, with each degree achieved, promotion earned or seeing improvement with their life, his face would shine knowing they’re going to be OK. Tony had lots of love for lots of people.  He never loved one more than the other. He always said that if he won big in the lottery, he would take care of his siblings and children first.

p>Tony also had a passion for golf.  He enjoyed getting together with his buddies on the course.  Many stories were heard over the years of golfing.  He might even be missing a few golf clubs and balls on the course, as a few were thrown, just to see how far he could throw them.

Aside from family and golf, work was also very important to Tony.  After 35 years with Strata, Tony took pride in his cement truck and often talked about how he cleaned it all day long. His pickup truck, well, that’s another story.  He had a special place in his heart for his coworkers and often gave the “younger guys” a little grief. Tony did have a good sense of humor.

As we sit here with tears in our eyes or sorrow in our hearts, Tony is probably sharing stories with his mother or playing a round of golf with his friend Doug, so watch out for flying golf clubs because Doug is good!

Until we meet again, we miss you Tony and will love you forever!

To order memorial trees or send flowers to the family in memory of Tony Vedbraaten, please visit our flower store.
Open