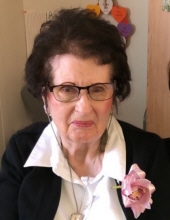 Verlys M. Homme (Malme), age 85, of Winger, MN, passed away on Saturday, December 19th, at Pioneer Memorial Care Center in Erskine. A graveside service will be held at 2:00 p.m. on Saturday, April 17th, at Dovre Free Lutheran Cemetery, rural Winger, with the Rev. Don Edlund officiating. All are welcome to attend. Arrangements are with Carlin Family Funeral Service of Fosston and messages of condolence may be shared at www.carlinfuneral.com.

Verlys Maureen (Malme) Homme was born at Shelly, Minnesota to Ole and Josie (Flikka) Malme on October 13, 1935. She attended grade school in Shelly and graduated from Climax High School in 1953. She attended Concordia College in Moorhead and graduated with a degree in Home Economics. She taught Home Economics in Plummer, Buhl, and Erskine, Minnesota. She was a very good soloist, having sung at numerous weddings since her early teen years. She was also a very good pianist. She quit singing as a soloist and pianist in 1960 after she was diagnosed with Multiple Sclerosis at the Mayo Clinic. She was very "up beat" about her MS and was never heard to say "why me?". She pushed herself to walk and keep going until 2016 when she could not stand or walk anymore.

She met Helmer Homme in early 1966. They were married September 10, 1966. After retiring from teaching, she and Helmer farmed as a couple until retiring in 1995.She had several major surgeries in her later years which were hard on her strength. She had to be admitted to Pioneer Memorial Care Center in 2014.Verlys and Helmer accepted Christ Jesus as their Savior in 1984.

Verlys was an active member of her church, different ladies aid circles, and in the Gideon's International. Verlys passed away peacefully on Saturday, December 19, 2020 at Pioneer Memorial Care Center with Helmer by her side.

She was preceded in death by her parents, Ole and Josie (Flikka) Malme; her brothers, Ken (wife, Kay), LeRoy (wife, Lorraine), Jubert (wife, Del); and a niece, Barbara Malme.She is survived by her husband, Helmer, of Winger; brother, Merle (wife, Linda) Malme; and numerous nephews and nieces.

To order memorial trees or send flowers to the family in memory of Verlys Homme, please visit our flower store.