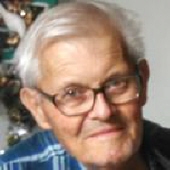 Vincent Agnes, age 79, of rural Gully, MN, passed away on Tuesday, January 27th, at his home surrounded by his family. A Mass of Christian Burial will be held at 10:30 a.m. on Saturday, January 31st, at St. Francis Xavier Catholic Church in Oklee, MN with Father Bill DeCrans presiding. Interment will be in St. Charles Catholic Cemetery, Trail. Visitation will be held from 5:00 p.m. to 7:00 p.m. with a 7:00 p.m. wake service on Friday, January 30th, and for one hour prior to the service on Saturday. All visitation will be held at St. Francis Xavier Catholic Church in Oklee. Arrangements are with the Carlin-Hoialmen Funeral Home of Fosston and messages of condolence may be sent at www.carlinhoialmen.Vincent Marlow Agnes was born to parents Johnnie and Emma Moy Agnes on May 6, 1935 in Hill River Township, Minnesota. He was baptized and confirmed at St. Charles Catholic Church near Trail, Minnesota. He attended Ridgelawn country school in Hill River Township through the eighth grade.Vincent and Geraldine (Pladsen) met at a church event and were united in marriage on August 31, 1957. Vincent was the only child of Johnnie and Emma. His greatest moments were spent taking care of his children, grandchildren and great grandchildren. He loved his family dearly, including his dogs. Vincent enjoyed hunting, fishing and driving trucks. He worked at Land O' Lakes for 37 years until their closing in Fosston and then helped out at the plant in Thief River Falls. He talked about early retirement at that time. Two days into his retirement, he began working for Olson Gravel. He worked there until his illness forced him to retire. He loved working there very much.Vincent passed away on Tuesday, January 27, 2015 in his home surrounded by his family at the age of 79 years. He is survived by his wife of 57 years, Geraldine of Gully; his five children, Brian (Kelly) of Cotton, MN, Jerry of Gully, Kevin of Gully, Connie (Greg) Eck of Trail, and Heidi (Noel) Wagner of Gully; 11 grandchildren, Sara (Brandon) Hoeft, Dustin (Melissa) Agnes, Amber (Randy) Agnes, Josh (Jacqueline) Agnes, Brianna (Dan) Aakre, Tyler (Katelyn) Agnes, Chase Agnes, Tianna Agnes, Tannen Agnes, and Lexi & Laci Wagner; nine great grandchildren, Haven, Avery, Morgan, Olivia, Liam, Camden, Bentley, Kade and Carson.Vincent was preceded in death by his parents; sons, James and Dale Agnes; sister-in-law, Marian (Francis) Weber; sister-in-law, Sharon (Lyle) Lund; niece Karen Bushelle; and great granddaughter, Hallie Hoeft.Honorary Pallbearers: All of Vincent's grandchildren and great grandchildren.Active Pallbearers: Curtis Olson, Tyler Agnes, Tannen Agnes, Dustin Agnes, Josh Agnes, Dan Aakre, Brandon Hoeft, Ryan Lund, Chase Agnes, and Lonnie Carlson.

To order memorial trees or send flowers to the family in memory of Vincent Agnes, please visit our flower store.