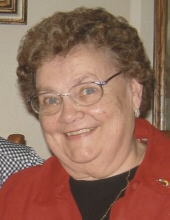 Vivian Rikje, age 84, of Gully, MN, passed away on Monday, February 6th, at Essentia First Care Living Center in Fosston. Funeral services will be held at 11:00 a.m. on Friday, February 10th, at Lund Lutheran Church in Gully with Dawn Hanson, LLM officiating. Interment will be in Lund Lutheran Cemetery, Gully. Visitation will be held from 5:00 p.m. to 7:00 p.m. with a 7:00 p.m. prayer service on Thursday, February 9th, at the Carlin Funeral Home in Fosston. There will also be reviewal for one hour prior to the service on Friday at the church. Arrangements are with the Carlin Funeral Home of Fosston and messages of condolence may be sent at www.carlinfuneral.com.Vivian Nina Brenna was born on November 28, 1932, the ninth child of Milton and Inga Olson Brenna at their farm home in Eden Township.  Inga died shortly after Vivian was born, and she was raised by her uncle and aunt, Thomas ("Little Pa") and Laura Olson of Trail. Vivian attended Lincoln School and graduated from Gonvick High School in 1950. Vivian was married to Donald Paulson on June 25, 1954 and they made their home in Fosston.  To this union, two children were born, Peggy and Keith.  Vivian was employed by Farmers State Bank in Fosston for a number of years and later worked at Northern State Bank in Gonvick, retiring in 1994.On December 14, 1973 she was married to Halvor Rikje at Lund Lutheran Church and they resided in Gully. After her retirement, Vivian accompanied Halvor throughout the years on his repair service calls in the area.  They enjoyed time together finding treasures at yard sales, dancing, camping and traveling.  Always active in the  communities she loved, she was a member of the Trail VFW Auxiliary, Trail All School Reunion  and Gully Centennial Committees, Lund Lutheran Church and Ladies Aid - quilting and serving her church as long as she was able, Gonvick All School Reunion Committee and Legion Auxiliary, and the Red Hat Club. She enjoyed coffee at the Gully Café with her friends and always had pictures to show off her grandkids. Vivian was proud of her Scandinavian heritage, and spoke Norwegian throughout her life. Vivian will be remembered for her love of family and friends, her twinkling blue eyes and warm, welcoming smile.Vivian passed away at the First Care Living Center in Fosston on Monday, February 6, 2017.  She is survived by her children, Peggy (Milo) Ystenes of Winger, MN; and Keith (Lisa) Paulson of Gully, MN; 3 grandsons, Danny (Elizabeth) Ystenes, Ben (Juliette) Ystenes and Cory (Gina) Ystenes; 5 great grandchildren, Olivia, Julian, Layne, Emelia and Leo; sister, Gladys Megorden of Savage, MN; step-brother Omer Olson and sister-in-laws, Esther Olson, Hazel Rikje, and Beverly Milk.  Also surviving are several nieces and nephews - including John (Ceci) Rikje and Ryan, who have given so much help in recent years, and Halvor's daughter, Anita (Phil) Pearson-Rikje of East Sussex, England and grandsons Taylor and Tollef.She was preceded in death by her husband, Halvor Rikje; infant granddaughter, Emily Ann Ystenes; brothers, Marvin, Atwood, Clifford, Irvin and Kenneth Brenna and Tenny Olson and sisters, Inez Gordon and Ruby Wooldridge.  Blessed be her memory.

To order memorial trees or send flowers to the family in memory of Vivian Rikje, please visit our flower store.