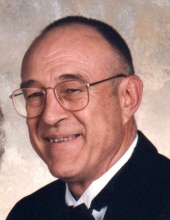 Wally Kresien, age 84, of Fosston, MN and formerly of Roy Lake, MN, passed away on Thursday, August 6th, at Essentia Health Hospital in Fosston. Memorial services will be held at 2:00 p.m. on Friday, August 14th, at Nee Gon Nee Lutheran Church in Roy Lake with Pastor Bill Beyer officiating. Visitation will be held from 5:00 p.m. to 7:00 p.m. with a 7:00 p.m. prayer service on Thursday, August 13th, at the Carlin Funeral Home in Fosston. Family will also greet friends for one hour prior to the service on Thursday at the church. Military honors will be provided by the National Guard Honors Team. Mask use is required at both the visitation and memorial service and social distancing will be observed. Arrangements are with Carlin Family Funeral Service and messages of condolence may be shared at www.carlinfuneral.com.Wallace Arthur Kresien was born Jan. 1, 1936 in Wadena Minnesota to Martha (Skalisky) Kresien and Ernest Kresien Sr. He was the youngest of the three children. The family lived in Wadena MN where Wally attended school. He proudly participated in the Boy Scouts of America achieving the rank of Eagle Scout. He graduated from Wadena High School in 1954. After high school Wally attended the University of Minnesota for two years, then took a summer job with the US Forestry Service that took him to Alaska. He returned to the University of Minnesota for fall quarter, but went back to Alaska, taking time off from school in the spring, to earn additional money for school.He was drafted into the US Army in 1958 where he did basic training and was stationed at Ft. Carson, Colorado. He received orders to go to Ft. Churchill in Canada. It was at Ft. Churchill that Wally served with the military band.He was introduced to Jackie Mittelstaedt in April of 1959 by an army buddy. Wally and Jackie were married at St. John's Lutheran Church in Pilger, NE on September 3, 1960. The couple made their home in Wadena, MN. At that time, he worked for his father. In January of 1961, they moved to St. Paul where Wally continued his education at the University of Minnesota. In June of 1961, they came back to Wadena for the summer. The first son, Ken Kresien, was born in August of 1961. The young family moved back to St. Paul where Wally continued to attend classes at the University of Minnesota. Their second son, Tom Kresien was born in February of 1963.In 1963, Wally left school and the family moved back to Wadena MN. Wally took a job with the Minnesota State Forestry Service on a survey crew. In 1967, Wally completed his college work, earning a Bachelor of Science in Forest Management from the University of Minnesota. The family welcomed the third son, Tim Kresien just as Wally secured a job with the Minnesota DNR. That job brought the family to Roy Lake, MN in 1968. During the 25+ years that Wally spent with the Minnesota DNR, Wally occasionally had opportunity to relocate, but he loved the Roy Lake area and wanted to raise his boys there. He enjoyed being in the woods, hunting, fishing, making maple syrup. During his time as forester at Roy Lake, he supervised many a fire crew as they chased and fought fires. He also oversaw the harvest and replanting of several thousand acres of trees.Wally and Jackie were active members of the Nee Gon Nee Lutheran Church at Roy Lake. Wally served on the church council there.Wally also served on the MM CDC Board of Directors.He and his wife, Jackie, particularly enjoyed occasions where they could dance. They were well known at Pinehurst resort for the exuberance and joy of their dancing.In September of 1992, Wally retired from the Minnesota DNR. He and Jackie liked Roy Lake so much that they bought property and began their retirement journey. Wally worked part-time for a couple of years at TEAM in Bagley, MN before he took full retirement. He continued to enjoy the fishing and hunting in the area until COPD slowed him down. In 2013, the rural life and the burden of COPD was overwhelming, and they decided to move in to Fosston, MN where Jackie currently resides.Wally is preceded in death by his mother, Martha (Skalisky) Kresien, father, Ernest Kresien Sr., brother, Ernst Kresien Jr, son Tom Kresien, nephew Ronnie Kresien, and sister-in-law Jewel Kresien. He is survived by his wife Jackie (Mittelstaedt) Kresien, brother, LeRoy (Donna) Kresien, nephew Gary Kresien, son Ken (Cheryl) Kresien, son Tim Kresien, grandson, Eric (Stephanie) Kresien, grandson Sean (Brilyn) Kresien-Bunker, grandson Alec Kresien.

To order memorial trees or send flowers to the family in memory of Wally Kresien, please visit our flower store.