Harriet Rolf, age 100, of McIntosh, MN, passed away on Tuesday, August 30th, at Pioneer Memorial Care Center in Erskine. Funeral services will be held at 11:00 a.m. on Saturday, September 10th, at Trinity Free Lutheran Church, rural McIntosh, with the Rev. David Jore officiating. Interment will be in the church cemetery. Visitation will be held from 5:00 p.m. to 7:00 p.m. with a 7:00 p.m. prayer service on Friday, September 9th, at the McIntosh Community Center. There will also be reviewal for one hour prior to the service on Saturday (10th) at the church. Arrangements are with Carlin Family Funeral Service of McIntosh and messages of condolence may be shared at www.carlinfuneral.com.

Harriet Irene (Nelson) Rolf was born at home in Arena Township, Lac Qui Parle County MN on November 30, 1921, to Henry G., Nelson and Inga Annette (Sorby) Nelson.  Harriet was baptized at home from Loken Church on December 29, 1921.  Harriet started attending school at District 91 near Haydenville in 1927 and soon broke her arm.  Because she was still 5 years old, her parents decided to keep her home and she restarted school in 1928.  Harriet was confirmed May 17, 1936, at First Lutheran Church in Madison, MN and graduated from High School in Madison in 1940.  Her father quit farming because of health concerns and the family moved off the farm and into Madison when Harriet was a Sophomore.  After graduating High School, Harriet attended Normal Teacher Training in Madison and graduated in 1941.  During the next two years, Harriet taught country School in districts # 83 and #7 in Lac Qui Parle County.  In the fall of 1943, Harriet and her sister Marian moved to Minneapolis.  Harriet got a job in the office at Lutheran Deaconess Hospital and enrolled at Lutheran Bible Institute.  Harriet kept this job until she graduated from LBI in 1945.

While at LBI, Harriet met Kenneth Rolf from McIntosh and in the summer of 1945 she moved to McIntosh and got a job at Dale’s Café in order to check out the area.  She rented a room at the Clara Vaatveit home.  In the fall of 1945, she was hired by two Lutheran Churches as a Parochial School Teacher in Henrichs, MN.  She taught classes five days a week at the City Hall.  She resigned her job on April 1, 1946 and moved home to Madison.  On April 26, 1946, she was united in marriage to Kenneth Rolf at First Lutheran Church in Madison.  They made their home on a farm in Lessor Township for the next 66 years.  They had six children:  James, Mary, John, Naomi, Joel, and Paul.  Harriet became immediately involved in Trinity Lutheran Church teaching Sunday School and VBS.  She was involved in Sunday School as a teacher for over 50 years.  She also served as Sunday School Superintendent some years.  Harriet loved to plan Sunday School programs and teach preschool children in particular.  In  1977 Harriet authored the AFLC WMF Bible Study on Philippians, a book of the Bible she had memorized,  and also served as an officer on the WMF board for a number of years.  Harriet was very happy to get a new house on the farm in 1962 so she could have running water and an indoor bathroom. In 1983 Harriet and Kenneth traveled to Israel on a tour and in 1993 they went to Norway for the graduation of a Grandson.  While in Norway she was also very excited to meet her first cousins who lived there. In 1994 she and Kenneth built another new house on a different site on the farm.  In 2013 they sold their house on the farm and moved to Greenleaf Assisted Living in Thief River Falls.  In November of 2014 they moved to the Country Place in Erskine.  While there, Kenneth died on March 31, 2016.  In November of 2017 Harriet moved to Pioneer Memorial Care Center following a fall.

Central to Harriet’s life was her deep faith in God.  She shared it with her family and all who knew her and it sustained her all her life.  Harriet had the gift of hospitality and always welcomed visitors. 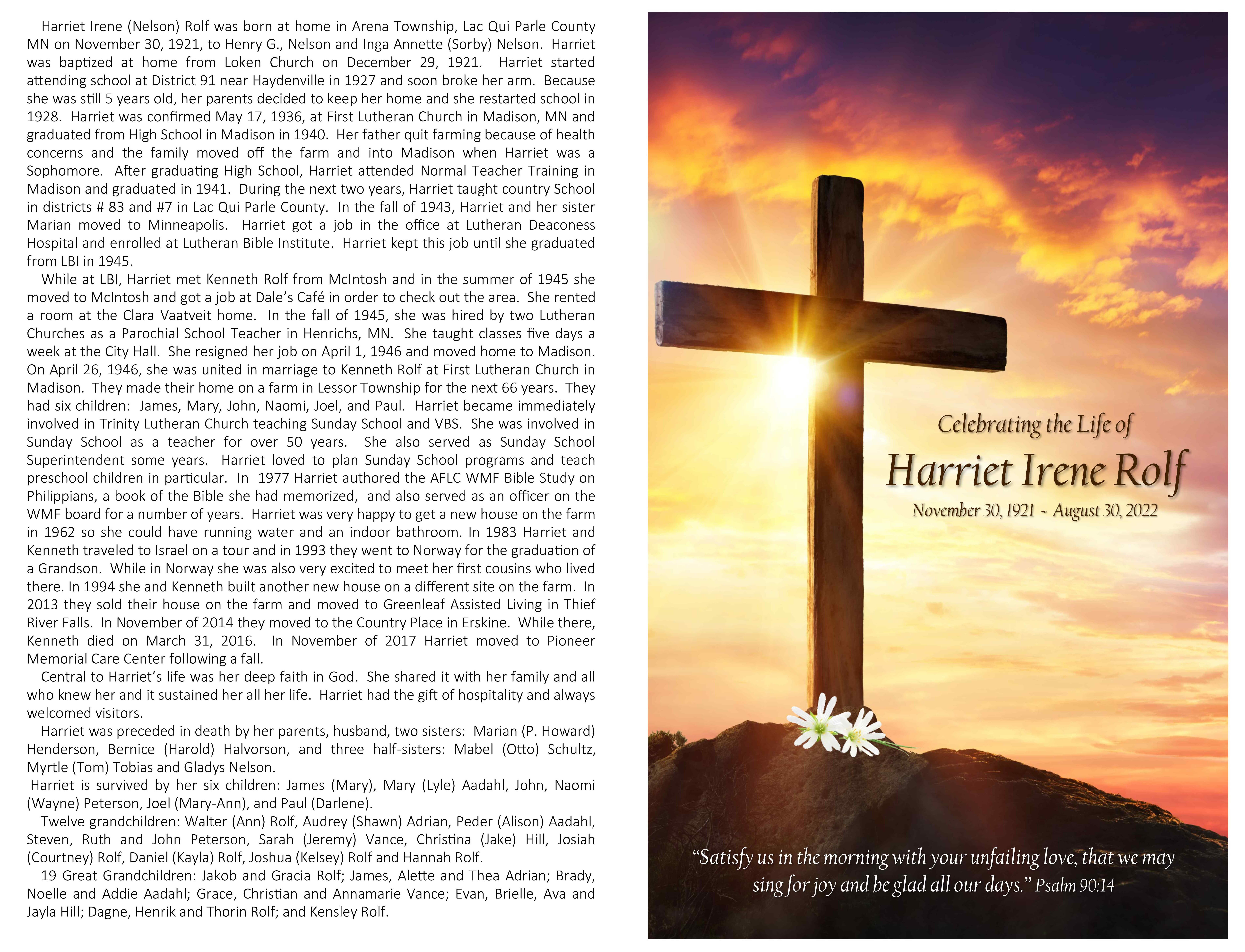 To send flowers to the family or plant a tree in memory of Harriet Rolf, please visit our floral store.

A Memorial Tree was planted for Harriet

We are deeply sorry for your loss - the staff at McIntosh, MN

Join in honoring their life - plant a memorial tree